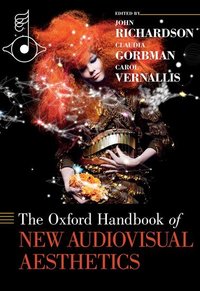 Media forms and genres are proliferating as never before, from movies, computer games and iPods to video games and wireless phones. This essay collection by recognized scholars, practitioners and non-academic writers opens discussion in exciting new directions

John Richardson is Professor of Musicology at the University of Turku, Finland, and author of An Eye for Music: Popular Music and the Audiovisual Surreal (2011) and Singing Archeology: Philip Glass's Akhnaten (1999).

Claudia Gorbman is Professor of Film Studies at the University of Washington - Tacoma, author of Unheard Melodies: Narrative Film Music (1987), and the translator of five books including four by Michel Chion.

Carol Vernallis teaches in Film and Media studies at Stanford University and is author of Experiencing Music Video: Aesthetics and Cultural Context (2004) and Unruly Media: YouTube, Music Video, and the New Digital Cinema (2013).

This handbook offers new ways to read the audiovisual. In the media landscapes of today, conglomerates jockey for primacy and the internet increasingly places media in the hands of individuals-producing the range of phenomena from movie blockbuster to YouTube aesthetics. Media forms and genres are proliferating and interpenetrating, from movies, music and other entertainments streaming on computers and iPods to video games and wireless phones. The audiovisual

environment of everyday life, too-from street to stadium to classroom-would at times be hardly recognizable to the mid-twentieth-century subject. The Oxford Handbook of New Audiovisual Aesthetics provides powerful ways to understand these changes.

Earlier approaches tended to consider sound and music as secondary to image and narrative. These remained popular even as practices from theater, cinema and television migrated across media. However, the traversal, or "remediation," from one medium to another has also provided practitioners and audiences the chance to rewrite the rules of the audiovisual contract. Whether viewed from the vantage of televised mainstream culture, the Hollywood film industry, the cinematic avant-garde, or the

The book provides a definitive cross-section of current ways of thinking about sound and image. Its authors-leading scholars and promising younger ones, audiovisual practitioners and non-academic writers (both mainstream and independent)- open the discussion on audiovisual aesthetics in new directions. Our contributors come from fields including film, visual arts, new media, cultural theory, and sound and music studies, and they draw variously from economic, political, institutional,

psychoanalytic, genre-based, auteurist, internationalist, reception-focused, technological, and cultural approaches to questions concerning today's sound and image. All consider the aural dimension, and what Michel Chion calls "audio-vision:" the sensory and semiotic result of sound placed with vision, an

encounter greater than their sum.