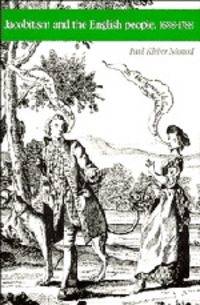 Although historians have devoted much attention to the influence of Jacobitism on Parliamentary politics, none has hitherto attempted to explore its broader implications in English society. Paul Monod's acclaimed study, newly available in paperback, redresses this, and offers a wide-ranging analysis of every aspect of Jacobite activity

'In a brilliant book, covering much entirely new ground, Paul Monod surveys the importance of Jacobitism in English society from newspapers, poetry, songs, prints, medals, clubs, riots, seditious words cases and rebellion, all reflecting different types of commitment. On the one hand Jacobitism reflected a yearning for the values of the Restoration of 1660 and divine hereditary right as a guarantee of social order and stability and, on the other, it provided a radical critique of Whig government ... English society was pluralistic, not monolithic, and Monod's book is essential to an understanding of it.' Eveline Cruickshanks, Institute of Historical Research||'It is a subject that has cried out for a chronicler. Paul Kléber Monod has accepted the challenge with a success that will reward all who study the era.' Reed S. Browning, The American Historical Review||'Monod must have our gratitude for putting eighteenth-century Jacobitism in an intelligible and acceptable perspective.' Brain W. Hill, English Historical Review