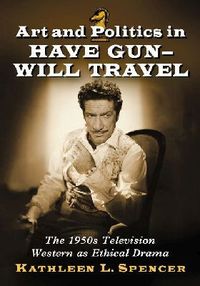 Art and politics in have gun - will travel: the 1950s television western as ethical drama

From 1955-1964, American television was awash in adult Westerns, accounting for as much as one-quarter of all prime-time programming. During its six seasons (1957-1963),Have Gun - Will Travelwas recognized as one of the best shows on television-politically the most liberal, and intellectually and aesthetically the most sophisticated, largely due to the influence of its star, Richard Boone. Part 1 places the series in its larger historical context, exploring why the Western was so popular in this decade (Chapter 1), and examining how the early history of television as a medium and a business shaped the shows that were broadcast (Chapter 2). Chapter 3, a brief biography of Boone, reveals how his values and experiences shaped the series, while Chapter 4 describes behind-the-scenes life onHave Guncompared to its longest-running and most popular competitors:Gunsmoke, Wagon Train, andBonanza. Part 2 turns to the specific episodes to analyze major themes and patterns, in particular the figures of the lawman (Chapter 5), gunfighters and outlaws (Chapter 6), racial and ethnic minorities (Chapter 7), and women (Chapter 8), again by comparison with its three competitors

Retired professor of literature and composition,Kathleen L. Spenceris a social historian with lifelong interests in genre fiction. She has also published major essays on Dracula, on science fiction authors Samuel Delany, Ursula Le Guin, and Joanna Russ, and a monograph on English fantasist Charles Williams. She lives in Cincinnati, Ohio.