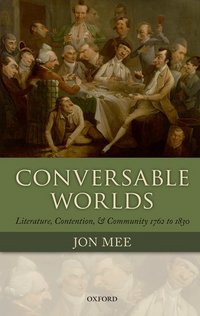 Around 1700 a new commercial society was emerging that thought of its values as the product of exchanges between citizens. A welter of publications - periodical essays, novels, and poetry - enjoined the virtues of conversation and were discussed in book clubs and literary societies, creating their own conversable worlds

Jon Mee was born educated in Nottingham before studying at the University of Newcastle upon Tyne and Cambridge. He was a Junior Research Fellow at Jesus College Oxford before taking up an appointment at the Australian National University in the early 1990s. He returned to Oxford at the end of 1996 to take up the Margaret Candfield Fellowship in English at University College and a post in the English Faculty of the University. He was appointed Professor Literature of

the Romantic Period before moving to take up his current appointment at Warwick in 2007. This current monograph was written while holding a Major Research Fellowship from the Leverhulme Trust. He has taught at the University of Delhi; University of Chicago, where he held a Shaffner visiting

Fellowship. While writing this book he was also a visiting fellow at the Yale Centre for British Art and the Humanities Research Centre of the ANU.

Conversable Worlds addresses the emergence of the idea of 'the conversation of culture'. Around 1700 a new commercial society was emerging that thought of its values as the product of exchanges between citizens. Conversation became increasingly important as a model and as a practice for how community could be created. A welter of publications, in periodical essays, in novels, and in poetry, enjoined the virtues of conversation. These publications were

enthusiastically read and discussed in book clubs and literary societies that created their own conversable worlds. From some perspectives, the freedom of a distinctively English conversation allowed for the 'collision' of ideas and sentiments. For others, like Joseph Addison and David Hume, ease of 'flow' was the

key issue, and politeness the means of establishing a via media. For Addison and Hume, the feminization of culture promised to make women the sovereigns of what Hume called 'the conversable world'. As the culture seemed to open up to a multitude of voices, anxieties appeared as to how far things should be allowed to go. The unruliness of the crowd threatened to disrupt the channels of communication. There was a parallel fear that mere feminized chatter might replace learning. This book examines

the influence of these developments on the idea of literature from 1762 through to 1830. Part I examines the conversational paradigm established by figures like Addison and Hume, and the proliferation of conversable worlds into gatherings like Johnson's Club and Montagu's Bluestocking assemblies.

Part II looks at the transition from the eighteenth century to 'Romantic' ideas of literary culture, the question of the withdrawal from mixed social space, the drive to sublimate verbal exchange into forms that retained dialogue without contention in places like Coleridge's 'conversation poems,' and the continuing tensions between ideas of the republic of letters as a space of vigorous exchange as opposed to the organic unfolding of consciousness.

a stimulating and erudite contribution to and critique of what we might call the Habermasian turn in Romantic studies.
Graham Allen, English||a fascinating exploration and analysis of a variety of writers through the lens of their conversational ideals and practices and the manifold ways in which they deployed them. It thus provides a rich and challenging contribution to the cultural and literary history of the long eighteenth century. Mee's meticulous research and his impressive range of periodical, magazine, and newspaper sources will also make this study invaluable for students and researchers alike.
Michèle Cohen, 1650-1850: Ideas, Aesthetics, and Inquiries in the Early Modern Era||Luxuriating in intellectual complexity, Mee's account is impressive, exhaustive, and at times dazzling. His willingness not only to examine but also to embrace conversation as a "combative tradition" is refreshing ... Mee has brought to the conversation something very significant indeed.
Kimberly J. Stern, Review 19||This is an invaluable and provocative contribution not just to eighteenth-century and Romantic-period studies, but to on-going debates surrounding the public sphere and sociability from the Enlightenment period right through to the present.
Helen O'Connell, Review of English Studies