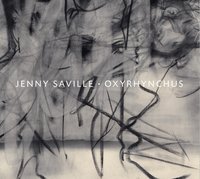 Oxyrhynchus is a city in upper Egypt that was established in 332 BC and is considered one of the most important archaeological sites ever discovered. Saville references the layer upon layer of discoveries at Oxyrhynchus in this book, the final effect being a mysterious narrative of layered bodies and images

No copies available at branches.

John Elderfield, a consultant at Gagosian Gallery, is Chief Curator Emeritus of Painting and Sculpture at The Museum of Modern Art, where he directed numerous celebrated exhibitions, among them Kurt Schwitters, Henri Matisse: A Retrospective, and De Kooning: A Retrospective. In 2005, Time magazine named him one of the 100 Most Influential People of the Year; and in 2006 he was made Officier dans l’Ordre des Arts et des Lettres by the French government.

“The British artist Jenny Saville is best known for painting monumental close-ups of large nude women exposing things that are usually left unshown: flab, fat, bulge. Her works are sometimes likened to those of Peter Paul Rubens. Among artists of her generation, Ms. Saville is unusual in her devotion to figurative painting. For her most recent art she has abandoned flesh tones and uses a charcoal palette.” –the New York Times