Catalogue Search for "subject:(Art, Modern)" Pretentiousness: why it matters 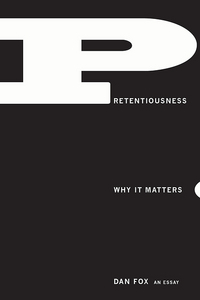 Pretentiousness: why it matters

Pretentiousness is for anyone who has braved being different, whether that's making a stand against artistic consensus or running the gauntlet of the last bus home dressed differently from everyone else. It's an essential ingredient in pop music and high art. Why do we choose accusations of elitism over open-mindedness? What do our anxieties about "pretending" say about us? Co-editor of frieze, Europe's foremost magazine of contemporary art and culture, Dan Fox has authored over two hundred essays, interviews, and reviews and contributed to numerous catalogues and publications produced by major international art galleries and institutions

Statement of responsibility: Dan Fox
ISBN: 156689428X, 9781566894289
Note: Dan Fox argues that pretentiousness has always been an essential mechanism of the arts, from the most wildly successful pop music and fashion through to the most recondite avenues of literature and the visual arts. "Pretentiousness: Why it Matters" unpacks the uses and abuses of the term, tracing its connections to theatre, politics and class. From method acting to vogueing balls in Harlem, from Brian Eno to normcore, Fox draws on a wide range of references in advocating critical imagination and open-mindedness over knee-jerk accusations of elitism or simple fear of the new and the different. Drawing on his own experiences growing up and working at the more radical edges of the arts, this book is a timely defence of pretentiousness as a necessity for innovation and diversity in our culture.
Physical Description: 150 p.
Subject: Modern art

"Reading Fox is like watching a gymnast perform a floor routine. He vaults and tumbles ideas and arguments, seamlessly incorporating criticism, pop culture, and stories from his own life, and sticks every landing.” —Los Angeles Review of Books, "Fail, Fail Again, Fail Better"

“Fox also cites the work of George Orwell and Susan Sontag repeatedly, and in this book he has written an intellectually rigorous study of culture that echoes the scope of their work. His argument is convincing, and it may leave readers with a newfound respect for the term that gives his book its title.” —Star Tribune

"In Pretentiousness: Why It Matters, Fox... offers a defense of acting like someone you’re not. It’s the way we cross boundaries and discover new lands.” —New York Post, "Gwyneth's Pretentiousness May Be a Good Thing After All

"Pretentiousness is impressively broad in its exploration of its subject . . . there is something deeply humane, and even touching, in Fox’s unwillingness to see any form or pretentiousness as bad. . . Fox has written a hopeful and stirring defense not just of pretentiousness in all its forms, but of the value of art itself.”—Slate

"Fox is a nimble writer, and his brief book includes surprisingly rich detours through history, philosophy, criticism, literature, ‘Withnail and I’ and more besides... Fox is attuned to the way tastes feel important because of everything that goes into them -- class, education, upbringing -- making them the embodiment of where we were from, and where we want to be."—
New York Times Sunday Book Review

“[Fox] elucidates in an intelligent and conversational style the many complex layers of aesthetic, class and social discomfort that often arise in the face of pretentiousness.”—Chicago Tribune

“This shrewd book argues that pretentiousness is central to our progress and our individuality.”—The Guardian

“This thoughtful essay will be balm to those who dare to be elitist, to snub artistic consensus.” —Toronto Star

“One of this book’s delights is its subtle and witty handling of the relevant etymologies. . . . This engaging study is at its most persuasive when it insists that pretentiousness and “the permissions it gives – the licence to try new experiences, to experiment with ideas, to see if you want to live your life another way” – is a vehicle not just for social vitality, but for individual freedom.” —Times Literary Supplement (UK), “Pretentious, moi?”

“If you read only one part of this bracing, lively, espresso shot of a book, I’d probably choose the final chapter. But there’s so much good stuff in this essay: insights about art, fashion, acting, music, film, culture, as well as urban and small-town life. I read it in one sitting and it spoke to so much of my life experience that it felt like I’d been waiting for it for years.”—The Millions

“...what Fox did with this little book is brilliant. It isn’t looking down on anybody, rather it’s Fox questioning why we’re so hellbent on looking down on intelligence, on loving great art, and why ‘Anti-intellectualism’ seems to be so in fashion when that in itself is really its own brand of pretentiousness.”—Vol. 1 Brooklyn

“Fox’s redemption of pretentiousness is a persuasive one, in terms of drawing out its positive creative potential, and revealing the prejudice which often underlies accusations of pretension.” —Minor Literatures

“More than being part of an “acceptable creative act,” for Fox pretentiousness is integral as an engine of self-creation — and we should all be more forgiving of it, at least sometimes.” —Flash Art

“In Pretentiousness, British author Dan Fox writes an unpretentious and effective overview of the role of pretense in the arts. . . . Fox’s nonjudgmental tact demonstrates sensitivity to readers of all stripes.”—Brazos Bookstore

“Witty and insightful . . . Knowing what it is like to be someone else is an essential part not just of cultural creation but of empathy itself. Not being ourselves is, as Fox shows, what it means to be human.” —Intelligent Life, UK

“Fox’s book is an elegant and convincing defense….” —Vulture

"In this wide-ranging study, Fox, the editor of Frieze, reclaims pretentiousness as a generative force in contemporary art." —Flavorwire

"Although the title is sure to elicit some knee-jerk reactions, Fox is an even-handed and likable guide on this journey. His ostensible defense of pretentiousness is simply a reminder that we’re all figuring it out as we go."—The Rumpus

"Fox is talking about social mobility: how a working-class boy who appreciates the avant garde might well be improving his life. 'We should encourage these people,' says Fox, 'not pillory them as pretentious.'" —Monocle

“We level charges of pretension at what violates our tribal sense of normality—as if ‘normal’ were a definable thing, and as if pretentious art weren’t hugely popular.”—The Rumpus

“Dan Fox’s Pretentiousness: Why It Matters is as provocative and witty as its title.”—The New Statesman

“Writing in a conversational voice that’s flexible enough to lead discussions of Greek theater and Victorian satire, as well as to reflect on his own middle-class upbringing, Fox’s encyclopedic knowledge of cultural offerings high and low allows him to ponder what the concept of pretentiousness tells us about the relationship between art and power and the spaces where they collide.” —Heavy Feather Review

“[Pretentiousness provides] a compelling example of. . . the perverse move of taking a pejorative term and reclaiming it as praise” —March Sadness

“A celebration of the weird, the challenging, the ambitious, and everything that makes art, music, pop culture, and life interesting.” —Porter Square Books, Staff Picks