Catalogue Search for "subject:(Individual actors & performers... Stanislavsky in the world: the system and its transformations... 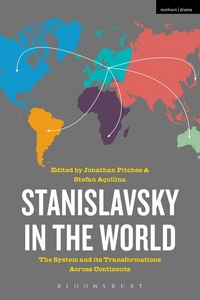 Stanislavsky in the world: the system and its transformations across continents

Stanislavsky in the World is an ambitious and ground-breaking work charting a fascinating story of the global dissemination and transformation of Stanislavsky's practices. Case studies written by local experts, historians and practitioners are brought together to introduce the reader to new routes of Stanislavskian transmission across the continents of Europe, Asia, Africa, Australasia and South (Latin) America. Such a diverse set of stories moves radically beyond linear understandings of transmission to embrace questions of transformation, translation, hybridisation, appropriation and resistance. This important work not only makes a significant contribution to Stanislavsky studies but also to recent research on theatre and interculturalism, theatre and globalisation, theatre and (post)colonialism and to the wider critical turn in performer training historiographies. This is a unique examination of Stanislavsky's work presenting a richly diverse range of examples and an international perspective on Stanislavsky's impact that has never been attempted before