The innocent eye: children's art and the modern artist... 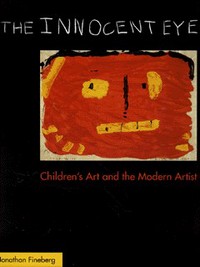 The innocent eye: children's art and the modern artist

Focusing on modern artists like Kandinsky and Picasso, this work examines how each artist exploited aspects of child art to formulate his or her own artistic breakthroughs. It juxtaposes modern masterpieces with children's drawings

"The most important contribution of Fineberg's book. . . is the way he weaves together evidence of modern artists collecting children's art, remarking upon it, using it in their work, and, in some cases, physically integrating it into their own. . . . This is all new material, and very important to our still developing sense of the role non-traditional art forms played in the working of modern art." --James Cuno, Harvard Magazine

||"In his fascinating, heavily illustrated study Fineberg shows how children's paintings inspired the works of many artists, such as Picasso, Miro, Dubuffet and Klee. . . . It's a convincing argument, but Fineberg also does a fine job of looking at larger issues such as how the postwar mainstreaming of psychoanalytic theory provided later artists with a handle on the feelings of childhood that went beyond the previous 'meticulous visual analysis of child art.'" -- Publisher's Weekly

||"As an anthology of superb child art, reproduced at the same scale and quality of colour as the `great works on modern art' that stand alongside them, The Innocent Eye is unsurpassed. In each specific case, the child's work is shown convincingly to be the source of the adult's. Both are honoured equally." --Timothy Hyman, Times Literary Supplement

||"The old modern art saw, `My child could have done that,' is addressed head-on in this engaging study." -- Library Journal

||"An illuminating and at times revelatory new book." --Richard Cork, The Times (London)

" The Innocent Eye is a provocative and refreshing contribution to be enjoyed by the average reader and to encourage in the specialist a new 'innocence' in both eye and mind." --Anne Coffin Hanson, the John Hay Whitney Professor Emerita of History of Art at Yale University