Bakhtin and his others: (inter)subjectivity, chronotope... 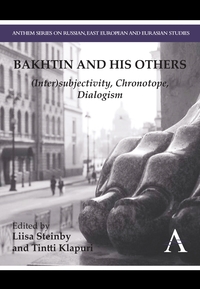 Bakhtin and his others: (inter)subjectivity, chronotope, dialogism

`Bakhtin and his Others' aims to develop an understanding of Mikhail Bakhtin's ideas through a contextual approach, particularly with a focus on Bakhtin studies from the 1990s onward. The volume offers fresh theoretical insights into Bakhtin's ideas on (inter)subjectivity and temporality - including his concepts of chronotope and literary polyphony - by reconsidering his ideas in relation to the sources he employs, and taking into account later research on similar topics. The case studies show how Bakhtin's ideas, when seen in light of this approach, can be constructively employed in contemporary literary research

Liisa Steinby is Professor of Comparative Literature at the University of Turku. Her main research interests include the problems of modernity and subjectivity in the novel from the eighteenth century to the present and related questions in literary theory.

Tintti Klapuri is Junior Research Fellow at the Department of Comparative Literature at the University of Turku, Finland. Her research interests include Chekhov, temporality and contemporary Russian literature.

‘This volume continues a current trend in Bakhtin scholarship devoted to contextualizing Bakhtin’s work by situating his essays not only with respect to the writings of the Bakhtin circle, but also within the wider context of the German philosophical tradition and early Soviet literary studies. […] [T]he overall quality of the scholarship is excellent, with individual contributors all citing recent and pertinent studies in the field.’ —Tara Collington, ‘Canadian Slavonic Papers’

'This stimulating collection will make a distinct contribution to the study of Bakhtin's work and its significance for literary historians.' -Professor Galin Tihanov, George Steiner Chair of Comparative Literature, Queen Mary, University of London