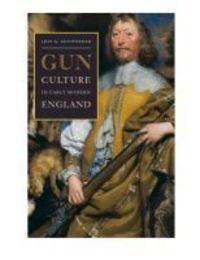 Guns had an enormous impact on the social, economic, cultural, and political lives of civilian men, women and children of all social strata in early modern England. In this study, Lois Schwoerer identifies and analyzes England’s domestic gun culture from 1500 to 1740, uncovering how guns became available, what effects they had on society, and how different sectors of the population contributed to gun culture. The rise of guns made for recreational use followed the development of a robust gun industry intended by King Henry VIII to produce artillery and military handguns for war. Located first in London, the gun industry brought the city new sounds, smells, street names, shops, sights, and communities of gun workers, many of whom were immigrants. Elite men used guns for hunting, target shooting, and protection. They collected beautifully decorated guns, gave them as gifts, and included them in portraits and coats-of-arms, regarding firearms as a mark of status, power, and sophistication. With statutes and proclamations, the government legally denied firearms to subjects with an annual income under £100?about 98 percent of the population?whose reactions ranged from grudging acceptance to willful disobedience. Schwoerer shows how this domestic gun culture influenced England’s Bill of Rights in 1689, a document often cited to support the claim that the Second Amendment to the United States Constitution conveys the right to have arms as an Anglo-American legacy. Schwoerer shows that the Bill of Rights did not grant a universal right to have arms, but rather a right restricted by religion, law, and economic standing, terms that reflected the nation's gun culture. Examining everything from gunmakers’ records to wills, and from period portraits to toy guns, Gun Culture in Early Modern England offers new data and fresh insights on the place of the gun in English society

Lois G. Schwoerer is Elmer Louis Kayser Professor Emerita of History at George Washington University, and Scholar in Residence at the Folger Shakespeare Library. She is the author of The Ingenious Mr. Henry Care, Restoration Publicist, among other books.