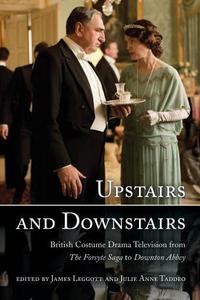 This collection addresses the social and political contexts that have shaped the British TV costume drama as well as the changing historical contexts in which such programs are viewed again and again (in syndication, on DVD, youtube, etc.) and are reinterpreted by a thriving twenty-first-century global fan culture. The international success of Downton Abbey has led to a revived interest in period dramas, with older programs like The Forsyte Saga being rediscovered by a new generation of fans whose tastes also include grittier fare like Ripper Street. Though often criticized as a form of escapist, conservative nostalgia, these shows can also provide a lens to examine the class and gender politics of both the past and present. In Upstairs and Downstairs: British Costume Drama Television from The Forsyte Saga to Downton Abbey, James Leggott and Julie Anne Taddeo provide a collection of essays that analyze key developments in the history of period dramas from the late 1960s to the present day. Contributors explore such issues as how the genre fulfills and disrupts notions of "quality television," the process of adaptation, the relationship between UK and U.S. television, and the connection between the period drama and wider developments in TV and popular culture. Additional essays examine how fans shape the content and reception of these dramas and how the genre has articulated or generated debates about gender, sexuality, and class. In addition to Downton Abbey and Upstairs, Downstairs, other programs discussed in this collection include Call the Midwife, Danger UXB, Mr. Selfridge, Parade's End, Piece of Cake, and Poldark. Tracing the lineage of costume drama from landmark productions of the late 1960s and 1970s to some of the most talked-about productions of recent years, Upstairs and Downstairs will be of value to students, teachers, and researchers in the areas of film, television, Victorian studies, literature, gender studies, and British history and culture

teaches history at the University of Maryland. She is an associate editor of the

Lytton Strachey and the Search

She is the editor of

On the Borders of Legitimacy, Fiction, and History

Steaming into a Victorian Future: A Steampunk Anthology

A central aim of this book is to follow the evolution of British costume dramas, from the varying approaches to the history and heritage they represent to the sexual politics of feminism, homosexuality, and fandom. Part 1 introduces a range of possible conceptual approaches in highlighting the changing British social and cultural contexts of both production and audience preferences. Part 2 examines the historical accuracy of

productions, including their gender and class roles, and challenges the models of the past as they reveal anxieties about national identity, multiculturalism, and masculinity. Part 3 moves the narrative from the domestic customs and morality of past decades into viewers' contemporary concerns and issues. Some of the BBC and ITV series under discussion may not be familiar to readers in the US, even those who are viewers of PBS fare or video-on-demand offerings, but even so there is much to be gained in traversing the critiques of music, fashions, costumes, and historicity in unwatched series and issues embedded in their texts. Given the present staggering popularity of

, both in the UK and globally, the present study is timely and provides a valuable grounding for a genre that is applauded around the world as one of Britain's masterful contributions to quality television. Summing Up: Recommended. All readers.