The comic event: comedic performance from the 1950s... 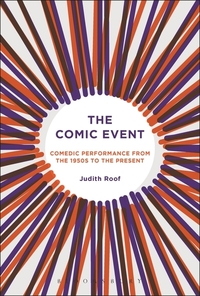 The comic event: comedic performance from the 1950s to the present

The Comic Event approaches comedy as dynamic phenomenon that involves the gathering of elements of performance, signifiers, timings, tones, gestures, previous comic bits, and other self-conscious structures into an "event" that triggers, by virtue of a "cut," an expected/unexpected resolution. Using examples from mainstream comedy, The Comic Event progresses from the smallest comic moment-jokes, bits-to the more complex-caricatures, sketches, sit-coms, parody films, and stand-up routines. Judith Roof builds on side comments from Henri Bergson's short treatise "Laughter," Sigmund Freud's Jokes and Their Relation to the Unconscious, and various observations from Aristotle to establish comedy as a complex, multifaceted practice. In seeing comedy as a gathering event that resolves with a "cut," Roof characterizes comedy not only by a predictable unpredictability occasioned by a sudden expected/unexpected insight, but also by repetition, seriality, self-consciousness, self-referentiality, and an ourobouric return to a previous cut. This theory of comedy offers a way to understand the operation of a broad array of distinct comic occasions and aspects of performance in multiple contexts