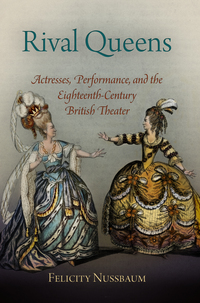 Historians of British theater have often noted that the eighteenth century was an age not of the author but of the actor. In Rival Queens, Felicity Nussbaum argues that the period might more accurately be seen as the age of women in the theater, and more particularly as the age of the actress. In eighteenth-century England, actresses were frequently dismissed as mere prostitutes trading on their sexual power rather than their talents. Yet they were, Felicity Nussbaum argues, central to the success of a newly commercial theater. Urban, recently moneyed, and thoroughly engaged with their audiences, celebrated actresses were among the first women to achieve social mobility, cultural authority, and financial independence. In fact, Nussbaum contends, the eighteenth century might well be called the "age of the actress" in the British theater, given women's influence on the dramatic repertory and, through it, on the definition of femininity. Treating individual star actresses who helped spark a cult of celebrity-especially Anne Oldfield, Susannah Cibber, Catherine Clive, Margaret Woffington, Frances Abington, and George Anne Bellamy-Rival Queens reveals the way these women animated issues of national identity, property, patronage, and fashion in the context of their dramatic performances. Actresses intentionally heightened their commercial appeal by catapulting the rivalries among themselves to center stage. They also boldly challenged in importance the actor-managers who have long dominated eighteenth-century theater history and criticism. Felicity Nussbaum combines an emphasis on the actresses themselves with close analysis of their diverse roles in works by major playwrights, including George Farquhar, Nicholas Rowe, Colley Cibber, Arthur Murphy, David Garrick, Isaac Bickerstaff, and Richard Sheridan. Hers is a comprehensive and original argument about the importance of actresses as the first modern subjects, actively shaping their public identities to make themselves into celebrated properties

Felicity Nussbaum is Distinguished Professor of English at the University of California, Los Angeles. She is the author of numerous books, including The Limits of the Human: Fictions of Anomaly, Race, and Gender in the Long Eighteenth Century.