Catalogue Search for "subject:(Great Britain)" Restitution past, present, and future: essays in honour... 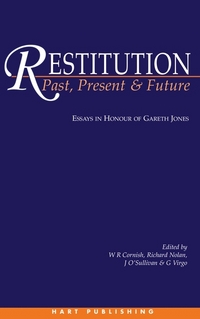 Restitution past, present, and future: essays in honour of Gareth Jones

The essays in this volume are dedicated to Gareth Jones, the retiring Downing Professor of English Law at the University of Cambridge. His contribution to legal scholarship has been immense, particularly in the fields of legal history, the law of trusts, charities law and, most famously, the law of restitution. The publication of the first edition of the Law of Restitution, which he co-authored with Lord Goff, stimulated a renaissance in the study of a subject which had previously lain dormant. The effect of its publication on English legal scholarship has been profound and enduring. In these essays, written by a group of the world's leading restitution scholars, the opportunity is taken to conduct a fresh appraisal of the development of the subject - to look, in other words, at the past, present, and future of the law of restitution. Contributors: John Baker, Peter Birks, Justice Finn, Roy Goode, Ewan McKendrick, Justice McLachlin, Sir Peter Millett, Lord Nicholls of Birkenhead, Richard Nolan, Janet O'Sullivan, Graham Virgo (as well as shorter contributions from invited commentators)