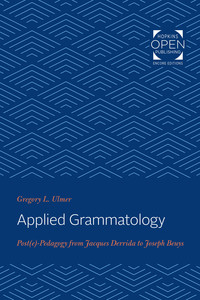 In Applied Grammatology, Gregory Ulmer provides an extraordinary introduction to the third, "applied" phase of grammatology, the "science of writing," outlined by Jacques Derrida in Of Grammatology. Ulmer looks to the later experimental works of Derrida (beginning with Glas and continuing through Truth in Painting and The Post Card). In these, he discovers a critical methodology radically different from the deconstruction for which Derrida is known. At the same time, he finds the source of a new pedagogy for all the humanities, one based on grammatology and appropriate to the era of audiovisual communications in which we live. Detractors of Derrida often accuse him of superficial wordplay and of using images and puns as nonfunctional subversions of academic conventions. Ulmer argues that there is, in fact, a fully developed use of homonyms in Derrida's style, which produces its own distinctive knowledge and insight. Derrida's experiments with images, moreover-his expansion of descriptions of everyday objects such as umbrellas, matchboxes, and post cards into cognitive models-serve to reveal a simplicity underlying intellectual discourse, which could be used to eliminate the gap separating the general public from specialists in cultural studies. Comparing the stylistic innovations of Derrida with Jacques Lacan's use of puns and diagrams, with the German performance artist Joseph Beuys's demonstration of models, and with the "montage writing" of the films of Sergei Eisenstein, Ulmer explores the possibility of deriving a postmodernist pedagogy from Derrida's texts. The first study to suggest the full potential of the program available in Derrida's writings, Applied Grammatology is also the first outline of a Derridean alternative to deconstructionism. With its shift away from Derrida's philosophical studies to his experimental texts, Ulmer's book aims to inaugurate a new movement in the American adaptation of contemporary French theory