Cromwell and the interregnum: the essential readings... 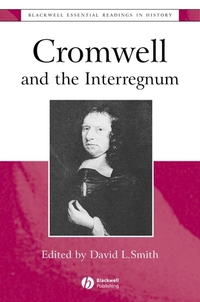 Cromwell and the interregnum: the essential readings

This reader brings together eight of the most influential recent articles on Oliver Cromwell and the Interregnum. It focuses on the years from Charles I's execution in 1649 to Cromwell's own death in 1658

David L. Smith is Fellow and Director of Studies in History at Selwyn College, Cambridge. He has won the Royal Historical Society’s Alexander Prize and Cambridge University’s Thirlwall Prize for Historical Research. He is the author of eight previous books on various aspects of sixteenth- and seventeenth-century history including Oliver Cromwell (1991), A History of the Modern British Isles, 1603–1707 (Blackwell, 1998), and The Stuart Parliaments, 1603–-1689 (1999).

"Here are eight of the best essays of the past twenty years on Oliver Cromwell in power. The collection is enhanced by David Smith's lucid and comprehensive introduction summarizing the current historiography on politics and religion during the Interregnum."
--Ian Gentles, Glendon College, Toronto

"This collection of important articles on the 1650s will be a boon to everyone interested in discovering more about the history of the Commonwealth and Protectorate, as will the editor's introduction, which is a splendid guide to many important themes of the history of that period."
--Barry Coward, Birkbeck College, London

This reader brings together eight of the most influential recent articles on Oliver Cromwell and the Interregnum. It focuses on the years from Charles I’s execution in 1649 to Cromwell’s own death in 1658.

The articles explore key themes, such as Cromwell’s complex personality, beliefs and motives; the nature of his role and influence during the Interregnum; his relationships with Parliaments, the Army and the Council; and the impact of the Commonwealth and Protectorate on British politics and society. They represent the diversity of approaches and perspectives that historians have brought to these issues, but all of them explore why Cromwell never achieved enduring political stability. The book is British in scope, including treatments of Ireland and Scotland as well as England.

The volume opens with an editorial introduction to recent controversies in the field, and each essay is prefaced with a headnote setting it within its historiographical context.