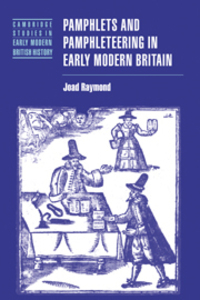 By the end of the 17th century the most effective means of persuasion and communication was the pamphlet, which created influential moral and political communities of readers. This book surveys the history of the printed pamphlet in 16th- and 17th-century Britain

'... rich and well-written ... Raymond shows an impressive command of the diverse fields central to the history of the pamphlet ...' The Times Literary Supplement||'... this book ... will undoubtedly become a reference point for all those interested in the genesis of public opinion as well as in the history of print. It will also give an excellent background to students and more advanced scholars who are interested in early modern history and literature.' Cercles||'Raymond's argument is ... convincing in terms of establishing pamphlets and pamphleteering as an influential literary form that needs to be acknowledged in the broader sphere. His work is as ever a pleasure to read ... This book would be particularly useful for students studying literary aspects of the press, and makes a valuable contribution to the growing library of work dedicated to the growth of popular political consciousness in early modern England.' Renaissance Journal||'I recommend Raymond's book to any person studying any aspect of the print culture or pamphlets or the growth of a public sphere in England.' Sixteenth Century Journal||'Joel Raymond's study, ranging wide and going deep, should be a vade-mecum for any historian drawn to the complexities of the inveterately scribacious period.' Literature and History