Catalogue Search for "subject:(Media studies)" Politics, society, and the media 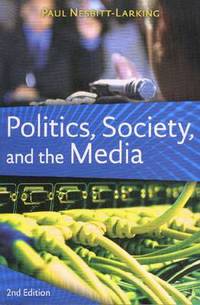 Politics, society, and the media

Politics, Society, and the Media is the first comprehensive political sociology of the media to be published in Canada. Paul Nesbitt-Larking draws upon a range of disciplines, including cultural and media studies, political economy, social theory, and political science to provide an analysis of the relationship between power and representation in Canada. The framework for the book presents a model of the mutual interaction between politics and the media. Attention is focused in the early chapters on how cultural, ideological, economic, and governmental forces shape and condition the production of media in Canada. Chapters on the work of Innis, Grant, McLuhan, and their postmodern successors place the evolution of McLuhan's theoretical argument that "the medium is the message" at the heart of the book. Canadian identity, and how to understand Canadian media politically, is the subject of a chapter on textual analysis. Two extensive chapters follow on the medias influence and effects on politics. In addition to standard topics on politics and the media, this new edition offers much more: an examination of the media on the politics of gender and aboriginal peoples, the micro-politics of the media workplace, and an exploration of important media-related considerations. Throughout, reference is made to relevant and compelling issues placed within the context of media theory