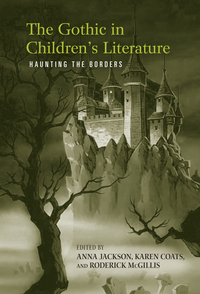 The gothic in children's literature: haunting the borders

From creepy picture books to Harry Potter to Lemony Snicket, fear has become a dominant mode of entertainment for young readers. This collection examines the early intersection of the Gothic and children's literature and the contemporary manifestations of the gothic impulse

Anna Jackson is Lecturer in English at Victoria University of Wellington in New Zealand.

Roderick McGillis is Professor of English at the University of Calgary. He is author of Nimble Reader: Literary Theory and Children's Literature, winner of the 1997 IRSCL Award for Distinguished research. His other books include A Little Princess: Gender and Empire(Twayne, 1996) and We Was Some Kind of Man: Masculinity in the B Western(Wilfrid Laurier University Press, forthcoming). He was one of six Senior Editors for the Encyclopedia of Children's Literature, forthcoming from Oxford University Press.

Karen Coats is Associate Professor of English at Illinois State University. She is author of Looking Glasses and Neverlands: Lacan, Desire, and Subjectivity in Children's Literature(University of Iowa Press, 2004), which was selected as a Choice Outstanding Academic Title of 2004.

The prevalence of Gothic themes in literature for young readers is the impetus for this collection, which fills a void in children's literature criticism. This timely collection presents a variety of perspectives and discusses a variety of texts, and so is a valuable addition to the literature. Recommended.  -- P. J. Kurtz, Minot State University, Choice

"Aside from the fact that this book is both compelling and interesting, it fills a necessary gap in recent children's literature criticism."  - Bookbird, Vol. 48, No. 1, January 2010