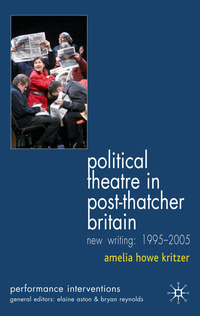 A timely reconsideration of the influence of politics on theatre and vice-versa, this title provides a comprehensive discussion of more than 75 plays by new and well-known playwrights between 1995 and 2005

'...a good introduction to the range of new writing in British Theatre over the past ten years...'

'This book answers the need for a general survey of new British plays, including mainstream drama as well as studio work, by focusing on the political aspect of drama staged in the past decade...Kritzer's readings of individual plays, focusing on the symbolic or political aspects of the work, are thorough and thought-provoking... [and] her engaging summaries of some eighty plays make this a very useful book for students.' - Aleks Sierz, New Theatre Quarterly