Shakespeare, Spenser and the matter of Britain 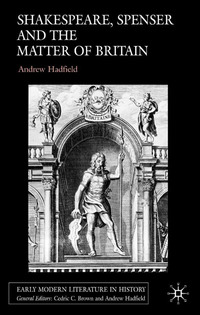 Shakespeare, Spenser and the matter of Britain

Andrew Hadfield examines the work of two of the most important English Renaissance authors, in terms of the cultural, social & political contexts of early modern Britain. He finds in their work a reflection of the ways in which English Jacobean culture began to come to terms with the expanding multi-ethnic state

'Over the past fifteen years, the work of Andrew Hadfield has been at the forefront of examining Ireland's importance for the Elizabethan imagination. His new collection of essays...usefully assembles a number of pieces that have appeared over the past decade, with two previously unpublished papers.' - Times Literary Supplement

'Hadfield's argument is exciting and stimulating...surely deserves gratitude of Shakespeareans and Spenserians for preventing both misopolitical reading and naive politicization of the early modern texts' - Mari Mizuno, Studies in English Literature, English No.47, (Mar., 2006)