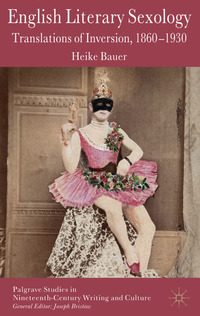 It is well known that much of our modern vocabulary of sex emerged within 19th-century German sexology. But how were the 'German ideas' translated into English culture? This study provides an examination of the formation of sexual theory between the 1860s and 1930s and its migration across national and disciplinary boundaries

'Bauer's tremendous scholarship and linguistic skills are evident as she explores the intersections of sexology, literature, and politics. She shows how slippages in translation between German and English are charged with meaning. Her book greatly expands and refines Foucault's legacy by focusing on gender and women's sexuality, making it essential reading for historians of sexuality as well as scholars of the fin-de-siècle.'

'This is, undoubtedly, an interesting and persuasive book...not just for its considerable insights into sexology, but for its ruminations on the processes of translation itself. Bauer's erudition shines through this book, bringing her claims to light with the deftness of her linguistic skills.' - Lucy Bending, British Society for Literature and Science Reviews

'Heike Bauer's extensive work with the histories and theories of sexuality is realized in English Literary Sexology: Translations of Inversion, 1860-1930... [The book] extends current scholarship on sexology and feminism to include considerations of the theoretical intersections of language, gender and discipline.' - Laurie Lyda, English Literature in Transition

'Departing from other historians of sexuality, Bauer tells a history of inversion that is not confined to the perspective of male authorities in the European sexological sciences. Rather, the book delineates a much more nuanced, intertwined history of subject formation and sexual knowledge production that highlights the original contributions of women writers in the tradition of English literary sexology... English Literary Sexology remains an important contribution, full of refreshing perspectives on the interplay between science and literature, modernism and sexuality, and epistemic exchange and cultural agency.' - Howard H. Chiang, Journal of the History of the Behavioral Sciences