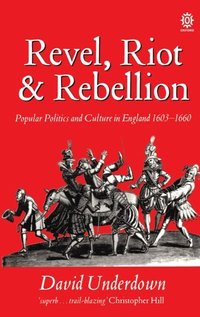 Revel, riot, and rebellion: popular politics and culture in England, 1603-1660

In this pioneering synthesis of social history and popular culture, David Underdown shows that local differences in popular allegiance in the Civil War coincided with regional contrasts in the traditional festive culture

David Underdown is Professor of History at Yale University. His other publications include: Fire From Heaven: Life of an English Town in the Seventeenth Century (1992).

What have maypoles, charivari processions, and stoolball matches to do with the English Civil War? A great deal, argues David Underdown.

Using three western counties as a case-study, he shows that the war was neither a dispute confined to the elite nor a class struggle of the 'middling sort' against a discredited aristocracy. It was in fact the result of profound disagreements among people of all social levels about the moral basis of their communities; commoners as well as ruler held strong opinions about order and governance. But these opinions varied from place to place, and through a pioneering synthesis of social history

and popular culture, Underdown relates political diversity to cultural diversity, and shows that local difference in popular allegiance in the Civil War coincided with regional contrast in the traditional festive culture. The book is thus an important reinterpretation of both the English Revolution

and the relationship between society, politics, and culture in the seventeenth century.

the real strength of his study lies in its illuminating detail. In page after page he reveals the intimate, domestic behaviour of ordinary rural people.
TLS