Listening through the noise: the aesthetics of experimental... 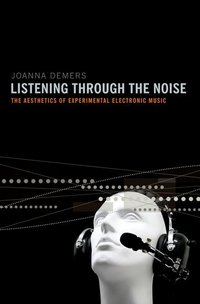 Listening through the noise: the aesthetics of experimental electronic music

Contemporary electronic music has splintered into a dizzying assortment of genres & subgenres, communities & subcultures. Given the ideological differences among academic, popular & avant-garde electronic musicians, is it possible to derive an aesthetic theory that accounts for this variety?

Joanna Demers writes on aesthetics, technology, and intellectual property in post-1945 music. She is an Associate Professor of Musicology at the University of Southern California.

Contemporary electronic music has splintered into a dizzying assortment of genres and subgenres, communities and subcultures. Given the ideological differences among academic, popular and avant-garde electronic musicians, is it possible to derive an aesthetic theory that accounts for this variety? And is there even a place for aesthetics in twenty-first-century culture?

Listening through the Noise explores genres ranging from techno to electroacoustic music, from glitch to drone music, and from dub to drones, and maintains that culturally and historically informed aesthetic theory is not only possible but indispensable for understanding electronic music. The abilities of electronic music to use preexisting sounds and to create new sounds are widely known. Author Joanna Demers proceeds from this starting point to consider how electronic music is

changing the way we listen not only to music, but to sound itself. The common trait among all variants of recent experimental electronic music is a concern with whether sound, in itself, bears meaning. The use in recent works of previously undesirable materials like noise, field recordings, and extremely

quiet sounds has contributed to electronic music's destruction of the "musical frame," the conventions that used to set apart music from the outside world. In the void created by the disappearance of the musical frame, different philosophies for listening have emerged. Some electronic music genres insist upon the inscrutability and abstraction of sound. Others maintain that sound functions as a sign pointing to concepts or places beyond the work. But all share an approach towards listening

that departs fundamentally from the expectations that have governed music listening in the West for the previous five centuries.

a thought-provoking and significant contribution to our understanding of the aesthetics of electronic music.
Peter Manning, Music and Letters