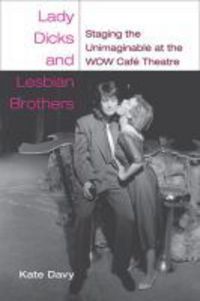 Lady dicks and lesbian brothers: staging the unimaginable at the WOW Café Theatre

A rich and detailed picture of a particular historical moment that has now passed . . . I found myself immersed in the world of the East Village theatre scene and its connections to the larger world of feminism, theatre, and politics. Davy's long-standing association with this world pays off handsomely---it is impossible to imagine that anyone could write a more informative portrait. Charlotte Canning, University of Texas at Austin. ""After hosting two annual international women's performance festivals in 1980 and '81, Peggy Shaw, Lois Weaver, and comrades put on such extravaganzas as the Freudian Slip party and the Debutante Ball (a coming-out party if ever there was one) to raise the first several months' rent for a narrow vestibule on East 11th Street, where they could keep the creativity going year-round. There, on a stage no bigger than a queen-sized mattress, . . . artists honed their craft, giving birth to a celebratory feminist-and-tinsel-tinged queer aesthetic. By the mid '80s . . . the rent quadrupled, and WOW moved to a city-owned building on East 4th Street, where it has flourished ever since, presenting hundreds---if not thousands---of plays, solo shows, concerts, dance pieces, cabarets, and sundry performances that defy classification."" Alisa Solomon, Village Voice. Out of a small, hand-to-mouth, women's theater collective called the WOW Café located on the lower east side of Manhattan, there emerged some of the most important theater troupes and performance artists of the 1980s and 1990s, including the Split Britches Company, the Five Lesbian Brothers, Carmelita Tropicana, Holly Hughes, Lisa Kron, Deb Margolin, Reno, Peggy Shaw, and Lois Weaver. The WOW (Women's One World) Café Theatre appeared on the cultural scene at a critical turning point in both the women's movement and feminist theory, putting a witty, hilarious, gender-bending and erotically charged aesthetic on the stage for women in general and lesbians in particular. The storefront that became the WOW Café Theatre saw dozens of excitingly original and enormously funny performances created, performed, and turned over at lightning speed---a kind of ""hit and run"" theater. As the demands on the space increased, the women behind WOW organized as a collective and moved their theater to an abandoned doll factory where it continues to operate today. For three decades the WOW Café has nurtured fledgling women writers, designers, and performers who continue to create important performance work. Lady Dicks and Lesbian Brothers provides a critical history of this avant-garde venture whose ongoing ""system of anarchy"" has been largely responsible for its thirty-year staying power, after dozens of other women's theaters have collapsed. WOW artists were creating a wholly original cultural landscape across which women could represent themselves on their own terms. Parody, cross-dressing, zany comedy, and an unbridled eroticism are hallmarks of WOW's aesthetic, combined---importantly and powerfully---with a presumptive address to the audience as if everyone onstage, in the audience, and in the world is lesbian. Author Kate Davy's extensive research included in-depth interviews with WOW veterans; newspaper reviews of the earliest productions; and rare, unpublished photographs. The book also includes a chronology of productions that have highlighted WOW's performance schedule since the early '80s