The mind of the child: child development in literature... 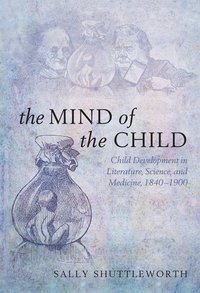 The mind of the child: child development in literature, science, and medicine, 1840-1900

In the 1840s novelists such as Brontë and Dickens began to explore the inner world of the child. Simultaneously the first psychiatric studies of childhood were appearing. Moving between literature and science, this book explores issues such as childhood fears, imaginary lands, sexuality, and the relation of the child to animal life

Professor Sally Shuttleworth is Head of the Humanities Division at the University of Oxford. She has published widely on literature and science, including George Eliot and Nineteenth-century Science; Charlotte Brontë and Victorian Psychology and Embodied Selves: An Anthology of Psychological Texts, 1830-1890 (co-edited with Jenny Bourne Taylor). She also co-directed the Science in the Nineteenth-Century Periodical project.

What is the difference between a lie and a fantasy, when the subject is a child? Moving between literary and scientific texts, Sally Shuttleworth explores a range of fascinating issues that emerge when the inner world of the child becomes, for the first time, the explicit focus of literary and medical attention. Starting in the 1840s, which saw the publication of explorations of child development by Brontë and Dickens, as well as some of the first psychiatric

studies of childhood, this groundbreaking book progresses through post-Darwinian considerations of the child's relations to the animal kingdom, to chart the rise of the Child Study Movement of the 1890s.

Based on in-depth interdisciplinary research, The Mind of the Child offers detailed readings of novels by Dickens, Meredith, James, Hardy and others, as well as the first overview of the early histories of child psychology and psychiatry. Initial chapters cover issues such as fears and night terrors, imaginary lands, and the precocious child, while later ones look at ideas of child sexuality and adolescence and the relationship between child and monkey. Experiments on babies, the first

Many of our current concerns with reference to childhood are shown to have their parallels in the Victorian age: from the pressures of school examinations, or the problems of adolescence, through to the disturbing issue of child suicide. Childhood, from this period, took on new importance as holding the key to the adult mind.

pioneering study of Victorian childhood
William Baker, Years Work in English Studies||Incorporating a wide range of historical documents and literary texts, and written in a clear, engaging style...a stimulating new perspective on the history of child development, which will appeal to a broad range of readers.
Roisin McCloskey, English||This is one of those books that makes so much sense that one cannot believe it has not been written before
Charlotte Sleigh, British Journal for the History of Science||A monumental piece of scholarship, impeccably researched and full of illuminating detail.
Gregory Tate, MLR, 106.4, 2011||In this fascinating volume a highly complex story is deployed with deceptive ease.
Metapsychology online reviews||This extremely readable, enormously wide-ranging work is a welcome addition to the shelves of literature and science scholarship
Melanie Keene, BSLS||Shuttleworth is masterful... [She] takes on an impressively wide range of topics in child-study and draws fascinating and often unexpected connections between them... In the end, The Mind of the Child prompts us to rethink our own assumptions about the history of childhood by revealing that the complexity of nineteenth-century discussions of child development is as layered and rich as is an actual human mind.
Andrea Kaston Tange, Nineteenth-Century Gender Studies