Catalogue Search for "subject:(Literature and history Great... Cheap print in Britain and Ireland to 1660 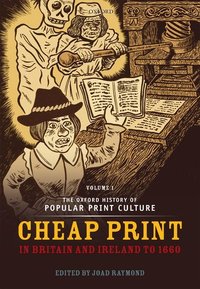 Cheap print in Britain and Ireland to 1660

From the early 16th century through to the later 17th, governments, institutions, and individuals learned to use cheaply-produced printed texts to inform, entertain, and persuade. This collection of essays examines the developing role of popular printed texts in the first two centuries of print in Britain and Ireland

Joad Raymond is Professor of English Literature at the University of East Anglia. His work explores early newspapers, politics, religion, and literary history, and the connections between these. Previous books include The Invention of the Newspaper (OUP, 1996), Pamphlets and Pamphleteering in Early Modern Britain (CUP, 2003), Milton's Angels: The Early Modern Imagination (OUP, 2010) and various essays and edited books. He is presently editing Milton's Latin Defences

for The Oxford Complete Works of John Milton, and also working on a project investigating early-modern international news networks.

What did most people read? Where did they get it? Where did it come from? What were its uses in its readers' lives? How was it produced and distributed? What were its relations to the wider world of print culture? How did it develop over time? These questions are central toThe Oxford History of Popular Print Culture, an ambitious nine-volume series devoted to the exploration of popular print culture in English from the beginning of the sixteenth century to

Between the beginning of the sixteenth century and the later seventeenth, governments, institutions and individuals learned to use inexpensively-produced printed texts to inform, entertain, and persuade. Cheap print quickly became rooted in British and Irish culture, both elite and popular. This substantial and authoritative collection of essays - the first of its kind - examines the developing role of popular printed texts in the first two centuries of print in Britain and Ireland. Its

forty-five chapters (with sixty-six illustrations) look at a broad range of historical and social contexts, at comparisons with other European countries, at the variety of content and themes in cheap printed texts, the forms and genres that developed with and were used by cheap print, and concludes with a

series of case studies exploring the role of print in particular years. The book takes none of these terms - Popular, Print, Culture - for granted, but interrogates each of them with a rich, contoured picture of the relationship between a popular readership, the materiality of books, the economy of the book trade, and political and cultural history. Its forty-two contributors come from different disciplines and with expertise in fields from political and book history, through visual and

material culture, to rhetoric and literature. These contributors do not all agree on definitions, or on the history that underlies them, but instead establish the ground for future debates and examinations of the role of cheap print in early-modern Britain.

the work is richly illustrated with photographs of all sorts of early modern documents that help bring the discussions home to us. The book (like the series of which it is part) is something we would expect every major university library to buy, and for students of popular culture, print culture, and popular print culture to make much use of.
Jonathan Roper, Folklore||a sophisticated, balanced overview of the current state of research into the social, cultural and political role popular print played in early modern Britain ... it will prove to be indispensible for scholars researching the cultural history of this period, as well as for librarians whose role it is to preserve these ephemeral relics of the past for future generations.
Erika Delbecque, University of Surrey||the very considerable range of contemporary printed sources deployed here is testimony to the contributors and their subject alike.
David McKitterick, Library and Information History||Popular culture is proverbially evanescent, so attempting to grasp the ephemera of an earlier age is a difficult task ... It is this vanished world that this impressive and authoritative volume, the first in the Oxford History of Popular Print Culture and the first of its kind, aims to recover ... [The] diversity is one of the book's major strengths, allowing the topic to be pursued across multiple different genres and critical perspectives.
Harriet Phillips, Cambridge Quarterly