Catalogue Search for "subject:(United Kingdom, Great Britain... Seasons in the sun: the battle for Britain, 1974-1979... 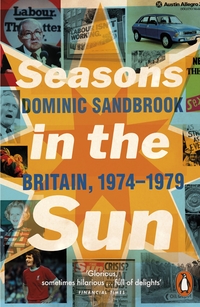 Dominic Sandbrook provides a gripping account of the dramatic events of the late 1970s in Britain as inflation rocketed, car bombs exploded across London and the Sex Pistols stormed their way to notoriety

Magnificent ... if you lived through the late Seventies - or, for that matter, even if you didn't - don't miss this book
Mail on Sunday||Sandbrook has created a specific style of narrative history, blending high politics, social change and popular culture ... always readable and assured ... Anyone who genuinely believes we have never been so badly governed should read this splendid book
Sunday Times||[Sandbrook] has a remarkable ability to turn a sow's ear into a sulk purse. His subject is depressing, but the book itself is a joy ... [it] benefits from an exceptional cast of characters ... As a storyteller, Sandbrook is, without doubt, superb ... [he] is an engaging history capable of impressive insight ... When discussing politics, Sandbrook is masterful ...Seasons in the Sunis a familiar story, yet seldom has it been told with such verve
Seven||[A] brilliant historian ... I had never fully appreciated what a truly horrible period it was until reading Sandbrook ... You can see all these strange individuals - Thatcher, Rotten, Larkin, Benn - less as free agents expressing their own thoughts, than as the inevitable consequence of the economic and political decline which Sandbrook so skilfully depicts
Spectator||Nuanced ... Sandbrook has rummaged deep into the cultural life of the era to remind us how rich it was, from Bowie to Dennis Potter, Martin Amis to William Golding
The Times||Sharply and fluently written ... entertaining ... By making you quite nostalgic for the present, Sandbrook has done a public service
Evening Standard