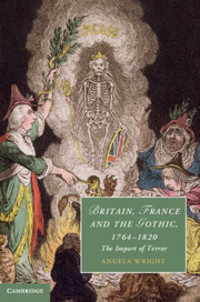 Shedding new light upon the genesis of the Gothic, Angela Wright examines the roles translation and military conflict played in its development in Britain. The author combines contextual and literary perspectives to situate the Gothic in relation to the Seven Years' War, the French Revolution and the Treaty of Amiens

'Contributes to a far more nuanced understanding of the politics of the genre.' The Times Literary Supplement||'Wright's elegantly written volume offers original perspectives and insights at every turn ... Consistently and convincingly argued throughout, Britain, France and the Gothic avoids the pitfalls of unspecified 'influences' and general similarities. Instead it maps channels of contact, borrowing, adaptation, rewriting and translation in order to demonstrate how Gothic fully participated in the many networks of Franco-British cultural exchange between the Seven Years' War and the post-Napoleonic era. A crucial contribution to studies of Gothic and the cross-cultural dimensions of British Romanticism, Wright's book is set to change how we study and discuss these literary manifestations beyond purely national boundaries.' Diego Saglia, BARS Bulletin and Review||'Britain, France and the Gothic, 1764-1820 is packed with precise textual analysis, clear historical investigation and contextualization, and many a well-turned sentence.' The Year's Work in English Studies||'Wright's book traces the French influences that Walpole felt compelled to play down, as did subsequent Gothic authors from Clara Reeve and Sophia Lee to Anne Radcliffe and Matthew Lewis, whose work appeared just as the British antipathy toward France rose to a fever pitch of anti-Jacobin hysteria. Her book is thus a history of writers' secret love for a culture that their own surroundings required them to hate or at least to denigrate. It offers up to the reader the less evident aspects of the way Gothic fiction crossed the Channel back and forth in the form of influences, translations, parodies, borrowings, and outright plagiarisms.' Yael Shapira, Common Knowledge