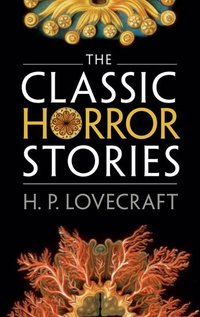 H.P. Lovecraft is a major writer of horror stories, in the genre of 'weird fiction'. This book brings together his core 'classic' fictions with a full contextual introduction, offering a balanced assessment of an influential cult author whose tales of metaphysical horror create a profound sense of dread and unease

H. P. Lovecraft (1890-1937) was an American author of horror, fantasy, and science fiction, known as 'weird fiction'. He published primarily in the pulp magazine Weird Tales and attracted a cult following. He wrote in the Gothic tradition, creating a profound sense of dread, and of contact with unknown spheres and powers. He created the Cthulhu Mythos, a series of interconnected fictions featuring creatures from human prehistory, and the Necronomicon, a

fictional textbook of magical rites and forbidden lore. He has influenced writers such as Robert Bloch and Stephen King, and film-makers such as David Lynch.

Roger Luckhurst is the author of The Invention of Telepathy (OUP, 2002), Science Fiction (Polity Press, 2005), The Trauma Question (Routledge, 2008), and The Mummy's Curse: The True History of a Dark Fantasy (OUP, 2012). He is an expert on science fiction and Gothic literature, publishing widely and broadcasting regularly on these topics. For Oxford World's Classics he has edited Late Victorian Gothic Tales, Stevenson's Strange Case of Dr

Jekyll and Mr Hyde, James's Portrait of a Lady, and Stoker's Dracula.

'Loathsomeness waits and dreams in the deep, and decay spreads over the tottering cities of men. A time will come - but I must not and cannot think!'

H. P. Lovecraft (1890-1937) was a reclusive scribbler of horror stories for the American pulp magazines that specialized in Gothic and science fiction in the interwar years. He often published in Weird Tales and has since become the key figure in the slippery genre of 'weird fiction'. Lovecraft developed an extraordinary vision of feeble men driven to the edge of sanity by glimpses of malign beings that have survived from human prehistory or by malevolent extra-terrestrial visitations.

The ornate language of his stories builds towards grotesque moments of revelation, quite unlike any other writer.

This new selection brings together nine of his classic tales, focusing on the 'Cthulhu Mythos', a cycle of stories that develops the mythology of the Old Ones, the monstrous creatures who predate human life on earth. It includes the Introduction from Lovecraft's critical essay, 'Supernatural Horror in Literature', in which he gave his own important definition of 'weird fiction'. In a fascinating contextual introduction, Roger Luckhurst gives Lovecraft the attention he deserves as a writer who

used pulp fiction to explore a remarkable philosophy that shockingly dethrones the mastery of man.

[Luckhurst] furnishes a satisfyingly wide-ranging introduction that situates Lovecraft's work in relation to his scientific materialist views and his rather chilly stance of "cosmic indifferentism".
Julian White, Times Literary Supplement||For those interested in Lovecraft but unsure of where to start, this book rolls out the welcome mat. Highly recommended for both new readers and seasoned veterans with an eye toward literary curatorship.
Booklist